From SNG
Jump to: navigation, search

Please post coordinates of portals and rail stations here, and I'll begin making a map of them. Hopefully, this map will allow us to better understand how best to implement the NetherRail network.

I've been putting track at y=121 to keep it safely above most hostile mobs and to give us room to jump out of carts without hitting our heads. For more scenic routes through the Nether, spenguin has been laying his track at y=64. I don't think we need a convention on this, but it might help?

When the Nether is added to SMP in 1.6, we'll have the ability to create a rail system 8x faster than what is possible in the normal world. As such, I propose that for longer rail journeys, we should consider providing a faster alternative through the Nether. One option is to essentially mirror GCS within the Nether; this would have to be a rough approximation due to the difference in scale, and rail-line congestion would likely be magnified as rail lines had to double-back on themselves to follow their real-world courses.

Personally, I would propose a system more akin to what is found in most subway systems - a few main lines/circuits serving the most densely populated areas with branch lines giving access to areas further afield. To transition to/from the Nether, stations with portals would be placed alongside the lines with buttons allowing travelers to continue along the line.

In short, one is more easily ridden, while the other is more easily built. I would also note that the two are not mutually exclusive - if we liked, we could run both systems side-by-side in the Nether, or put together a rail network in a more piece-meal fashion as the server grows and settlement expands. I've had some success with the 3-way junction shown below; perhaps something like it could be used to navigate/access the branch lines on a subway-like system? 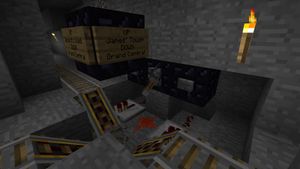