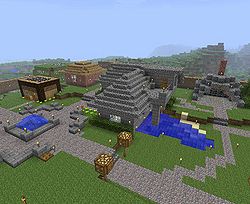 Overlooking the southwest portion of the town of Newton.

The town of Newton is a small frontier community of miners, builders, and explorers. It was founded by Relsqui and is currently also occupied by aliaras and photosynthetica. The concept was originally described and proposed in this text file.

Along with its designed purpose, the talk page for this article contains a more detailed guide to the town's resources, as well as some administrative discussion. Residents are encouraged to watch it to stay up to date.

Newton is named after both Sir Isaac Newton and its increasingly inaccurate description as a "new town."

New residents are welcome! Some building materials are available in public chests for anyone to use; see "Where to Find Supplies" on the talk page. When creating a new structure, please follow these guidelines:

For the most part, please keep buildings fairly small unless there's a reason to do otherwise (and in that case, discuss it with the other residents first). There's plenty of room in the rest of the world for big wild structures. The point of the town is to have a closer and more communal community.

Don't forget--if you take up residence in Newton, you're entitled to update the population sign outside the north gate. 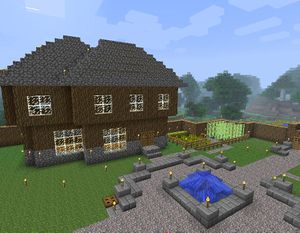 New arrivals are invited to take a room in the inn until they have built their own houses or if they do not wish to do so. To claim a room, change one of the "Available" door signs to something with your name in it, and then update the number of available rooms shown at the front desk. Don't forget to sleep in your room to set it as your spawn point.

The inn's common room is open to anyone in Newton for dining, socializing, crafting or smelting, and sharing supplies. Feel free to take things you need from the chests there, but please keep them tidy. Food at the inn comes from the public gardens, free-range livestock around the town, and other local sources.

An attic is accessible via ladder from the upper story of the inn. It's currently used for storage of full stacks of extra items that won't fit in their usual places. These can also be removed freely, but please leave only full stacks in the attic chests. (Extras can go back to whatever chest the item would normally have been in.)

Downstairs from the common room, in the basement of the inn, is the Bad Apple Bar & Grill. The Bad Apple features a full bar and booths for dining, as well as a dance floor, jukebox, and pool table. Behind the bar is a small stillroom for potion brewing, containing many netherwart. 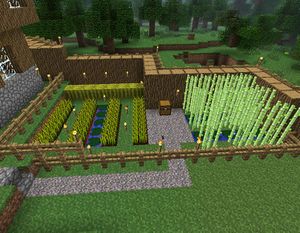 There are two farms within town limits, one for sunlit crops and one for mushrooms. Both may be harvested freely but should be left prepared to grow again: the crop garden tilled and planted, and the mushroom farm dark and seeded.

The crop garden is in the southeast corner of the town. It has four rows of wheat, three of sugar cane, and one of watermelon. All irrigation channels have lily pads in them for ease of traversal and harvest. There's a chest on the garden patio with seeds, saplings, bonemeal, and tools for public use.

The mushroom farm can be reached by dropping through the manhole on the north side of the old plaza and breaking open the cobble or earth wall at the bottom. Remember to close it up again when departing, and leave at least one of each mushroom in the ground so they can spread.

Extra produce from both farms should be dropped in the food chest at the inn's common room. When the stack of wheat seeds or oak saplings in the garden chest overflows, the full stack should be taken to the inn's attic and the remainder left in the chest. 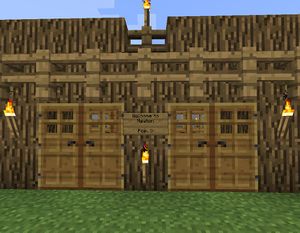 Newton is surrounded by an oak wall which is fortified to protect against all terraside monsters (besides Endermen). When expanded, it should always be three meters tall on the inside and at least three meters tall on the outside (these may differ due to terrain), have a row of wooden fence along the top row of the outside, and have lights posted at intervals along the top and inside. Supplies for wall and road building are in the small chest in Relsqui's attic--donations towards upkeep and expansion are welcome. Materials in that chest should not be used for any other purpose, and any major changes to the wall and road system should be discussed in IRC or on the talk page first.

There are four gates in the wall: one each to the north and south, and two to the west. The latter are differentiated by the nicknames Pond Gate (at the south end of the west wall, opening onto a pond) and Nether Gate (at the north end, near the cave with the nether portal). Each gate has small gatehouse with a ladder leading to the top, a torch at the front, and a slightly higher surrounding wall.

Because of the height specification and the fence, it's harmless to jump into town from the top of the wall in most places, but expect to take a small amount of damage when jumping out. 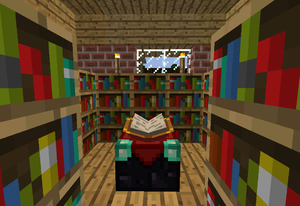